...and onwards to Kokkola and The Rock Pub! After a decent gig yesterday at Lutakko, the possibilities to make this night a one to remember were strongly right in our hands. Sure as hell this month had been the best for Adamantra this far, and since tonight`s show was to be the finishing point on our little November-campaign the time was ripe to get the freakin` last drops of fun out of it! Having once again the Leverage sharing the stage with us, it became evident that those guys were the ones to share with us some intoxication as well!
There were some nice dancers entertaining the audience between the sets, unfortunately photos of that are unavailable.. that brought some extra flavour to the evening, had to even use the same dressing room with these flexible samples of the opposite gender...very unfortunate eh.. 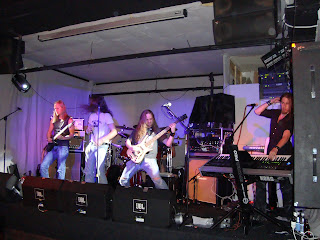 Extremely dampened stage, felt pretty funny as all the noise seemed to melt into the wall around the drum set. If not dampened, the result would propably have been sheer sonic chaos..
We had the same set here as yesterday, the only difference was to simply give it out even more since there was to be a quite long break `til the next gig. Don`t know about the "outgiving", but at least the songs made the stage hot like hell, forcing me to pour down couple beers extra fast. That was also kinda calculated thing because the aim was to drink our asses off right after the gig, so the thing had to be started early enough. And as far as I`m concerned, our aim was high and from heights the bottles also dropped. Below comes few shots, please serve yourselves; 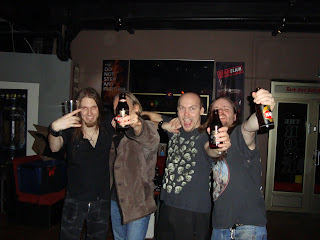 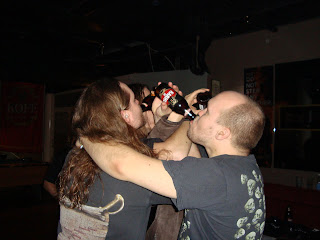 The necessary... excuse me, which one was my beer again...? 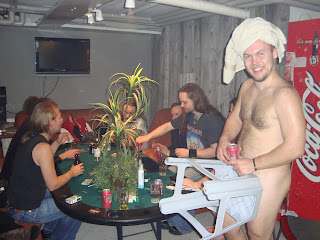 Excuse my manners, lost my towel that`s all...man, you gotta wash sometimes or what!? 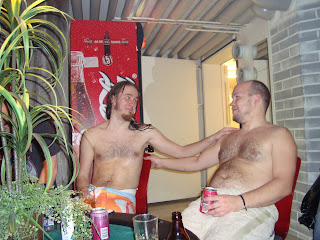 In spite of the expressions in this pictures, no soap was dropped on the floor... 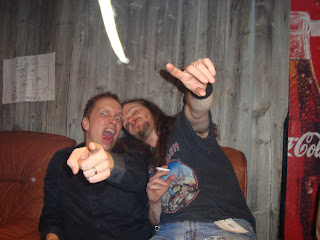 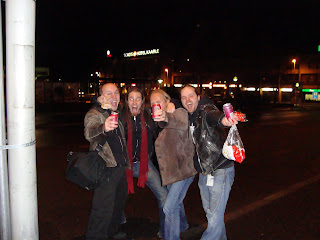 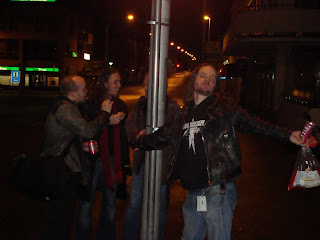 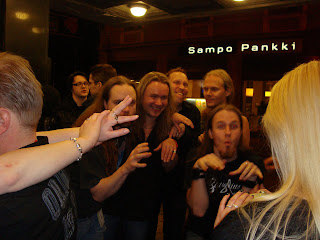 Posing with the evil metal rodents... 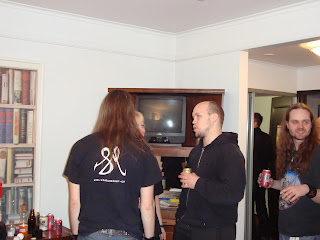 As a keen history researcher, I was privileged to have a chat with this lady who turned out to be a history teacher. While having a great time with her, she unfortunately couldn`t enlighten me of the mysterious Necronomicon. I was sad. But in addition to knowing she was specialised in a different areas of history, I now finally understood, that in order to get deeper into the truth behind this sumerian black bible, the only person who could assist me was...was....wa-...w--oh, the p-p--p---poison... :)) 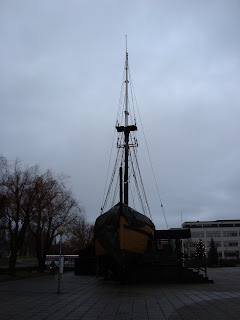 Ever heard of a certain man named Marco Polo? Allegedly he was the first western man to visit the mighty empire of China around 1271 AD. Check out for more facts via Wikipedia if interested. There you can see for yourselves how the tentacles of secret societies have blindfolded the eyes of the nations, since all the official documents concerning Mr Polo are but a massive pile of faked truth. NOTE! According to the local Kokkola peoples`s legend, he accidentally ended up RIGHT HERE in Kokkola, and because of the facial similarities between the Saame-people (who inhabited this area during that time) and the chinese, he mixed up these different races. A clear evidence can be seen on this foto, where the ship which Mr. Polo used, is shown. Note the distinctive venetian-style construction. Left of the ship is the river which leads all the way to the Mediterranean Seas. Lo and behold, dear fans of Adamantra, for the truth is to be had only through this frequently updated bloooooog!
In addition to this legendary ship, a great amount of other equally important and mystic artefacts can be seen in Kokkola. A legend has it, that a vast stone behind a hotel...
(To be continued in our next Kokkola-blog sometimes in the future) 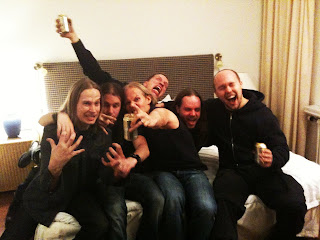