All gather up around the bonfire (or shake the mouse), for the storyteller has just finished his ale, and after a dragon-like burp is ready to share the events with You, friends and foes alike!

First, thank you goes to everyone who attended the show!
Hopefully liked it, there`s more to come!

So, this was one of those D-Days for Adamantra as we finally could celebrate the hard and frustrating battle been won. In this battle, the tricky little bloody bastard A-team succeeded in luring an innocent victim down the cave, just to be sliced in pieces by some slimy, hairy progpowermetal! This victim turned out to be SOF and it`s minion Poison Pill. Actually, the gruesome A-team started to like its prey so much, that instead of simply cooking it naturell it decided to give the prey some chances to get back to sunlight to spread the adulations towards it`s former master.

NOTE! This was a double-layered story. Find the Thruth. Search in yourself. Find what lies above and below (hmm, ceiling, carpet?). No, there`s no way you can find the secrets of this text just by playing it slowly backwards (?!). HINT! Use your ancient wisdom in order to understand, that in this case the hunter and the hunted MIGHT have been changing places...hmm...riddles in the dark...clever...or not..

However, these are the things a band have to consider when inking a deal with a record label, but fortunately in our case, things have gone extremely smoothly (like fresh Guinness down the hatch), and it truly is nice to see that the business isn`t that rotten, eventhough there has been sights of that to be seen elsewhere during the years. Yes, this is a great thing for us, but the road is long indeed and this is just the beginning. Let`s say, the shoelaces are tightened so the journey begins. May the Gods of time signatures be with us..:)
After the Intro, Panu`s and Jukka`s little hide and seek-moment(?!), and me finally finding the Play-button(WTF?!) the hardest steel claws begun to attack the audience from the stage as the oceans-moving Beyond Disillusions was released in the air. There was some inspiration flowing near since the original notes and beats were (ahem intentionally of course) occationally replaced by some futuristic arrangements. We decided not to use the same method next time, but isn`t it a commonly accepted fact, that 2 or 3 mistakes is bad but aaaall above that is progressive...?

The stage was maybe biggest this far, and with the cordless systems, A-stringboys were able to take the whole platform in use. We could get used to this! The sound policy was good at least for myself, the mixer/trigger-alliance again prevails, I had to check regularly that the vibrations at my feet were not caused by those hundred hazelnuts rolling out from my trousers and all the way off the drumraiser yijeaahhh!!:)) Maybe the guy behind the mixer saw it coming and for safety reasons, muted the bass drums from PA during Ungiven. That is so,so unforgivable.. Well for me it was no big deal since I heard all the shit via mixer anyway.

We had the same sonic menu tonight as with previous gigs, it seems to be the right one for us all,
two arsekickers, Shattered and The Oracle as the last ones WILL make it clear for everyone that this band have at least two near-perfect songs, right?;) Gotta put some video stuff as proof ladies and gents..

The other bands Soulcage and the headliner Amberian Dawn were nice suppliments for this event, neither one were so much different from our material so it was kinda compact set of bands this time, I myself missed the former one almost completely, for my bestial lust for sandwich and beer prevented me from moving nowhere else than to the entrance hall to greet the friends. And what I meant by missing -almost- the whole Soulcage gig meant that I was still creeping and crouching behind the raiser (in quest of salvaging my beloved walkers) when their intro begun...

Assumably every member of A-team was witnessing the Amberian Dawn opera-metal, the crowds were many and lots of people to talk with, so the night aviated on with darkened wings, going ever faster...or maybe it was the "yhdentähdenperhejallu" which was needed since the beer we brought with us, now tasted so lame. Also the champagne was left in Alko.

A-team has seemingly lost it`s understanding of Time, or then Alko should be open 24/7... No Bollinger, no Havana, no pus.. okay, the night went ok, it was nice to see AD with two shredders nowadays, classical melodies with beautiful interpretation and solid drumworks etc. Guys were crazy enough to start deloading the backline in the night, while in front of the stage me and Jukka were swaying with "yhdentähdenperhejallu" in hand, giving great advice of course;). No, we were not assholes, we kindly handed the bottle to AD-guys, and the liquid tension experiment was a success hehee.. From this day forward, every AD song is hereby 20bpm faster, like it or not!:)

When it was time to get out of Gloria, we headed to a certain Bevarian-style restaurant to get some additional nutrition. Once again the clock leaped to some fucked-up time since they didn`t have any food to serve us! C´mon, it was 2:30 am and the kitchen is already closed!?:) Well, that very tasty wheat bear saved the situation for a while, though it was hard because of the crappy tekno/trance/jungle shit or whatever....

So the days of Gloria were over and it was time to get healed so the next day`s heaving wouldn`t be so painful. 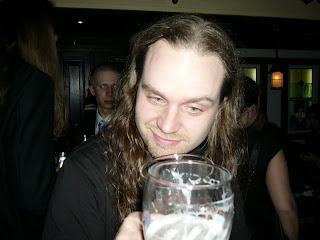 Is it really exactly one or two...? 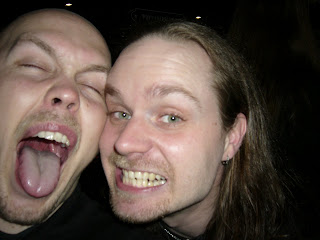 
Once again, a big thank you goes to all you who attended the show. Now get back to order some more Revival!
With gory and glory,
Mikko