We had some great expectations towards this day, since rumours told that our headliner Machinae Supremacy had managed to put up some great gigs on their ongoing tour in Finland. When we arrived to S-Osis the swedes were already there, very cool guys, seemingly happy for the success here this far. We roughly just heaved the A-stuff on the stage and went back to our hotel to get some sleep, food, beer and shower. Got back in the scene when it was time to raise the drumkit from nothing, well nowadays it`s guite fast action since the “x marks the spot” on the carpet, so you just have to drop the rack on it`s position and start putting symbal stands etc. to it .Again the rack shows it`s advantages, 15-20 min and the set is ready (excluding hangover days when it takes double time). As I got out of the way the other guys could start their things, amplifiers on top of each other and some other bodybuilding action. Panu`s new Framus amp sounds damn good, though everything hasn`t even been done yet to get the very best out of it! 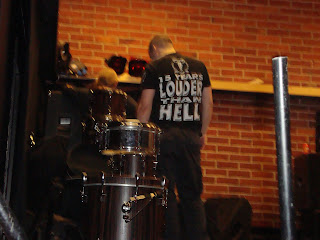 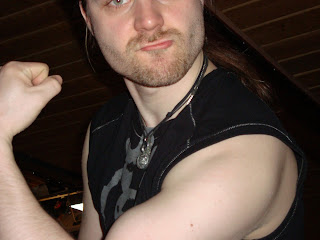 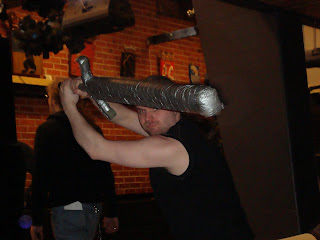 The quest for the Sword of Infinity accomplished. Beware, for the Cosmos is about to faaaall...
As we were to be the first (worst?) band to play tonight, we therefore did the sound check after the two other bands. There are two positive things in playing as the first band; firstly, you have your gear ready after the check so there`s no hassling with anything, unless you happen to pull out some plugs in the middle...;). Secondly, after the gig there`s more time to search for drinks in the backstage, and make use of them fast. Okay, there was lots of people right from the start (MS really is surprisingly big in here), can`t remember the exact numbers but the place was nearly sold out. And it really seemed to be that way, the crowd was near the stage and listening closely what this new progmetal-group had to offer. We offered them our semi-complicated yet catchy material, and they seemed to take it. We just have to wait for the debut album to spread all over the land, so people start knowing the songs and can from that on bang their heads with us in 3/4, 5/4 and 7/8 time signatures hahhah! 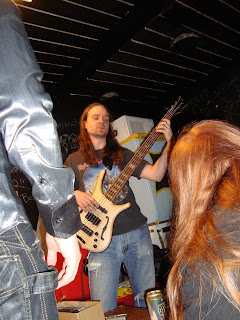 Last check of the fretboard, no significant burn marks to be found yet... 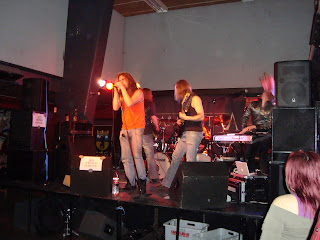 Manipulated picture. The audience is removed in order to get the band in sight :) Actually there was people, but at this point just analyzing from afar what the hell happens on the stage. Once the Adamantra-engine got running at full speed the audience were sucked in yeah!

After us, Simulacrum played some interesting complex prog, a mixture of Dream Theater and Rush. Very talented young guys! Because of some technical problems they started their gig a bit delayed, so the tight schedule naturally forced them to leave a song or two from their list. Finally, Machinae Supremacy started their straight-on-going songs. Crowds really liked it so it was a good finale for the evening. After Adamantra-gig the beer bottles were going empty faster and faster so at the end it was time to get some more by stopping in the bar next to our hotel. For my joy I found out that Panu was a whisky connoisseur so I was enlightened by some basic facts about single malt- and blended whisky. Being an entry-level rum fan (Havana Club 7 years dominates) it`s nice to get familiar with another element of booze. Whisky seems to have that same deep, mysterious vibe in it, like it downright invited to explore the secrets in itself...:) (Thanks to the series Band of Brothers, I from now on will always have a bottle of VAT69 on the shelf ). 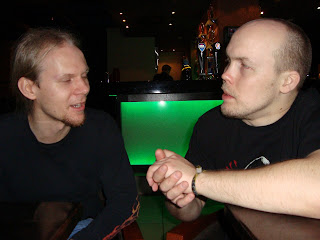 Master <-> apprentice. Amidst sharing deep, emotional, touching musical thoughts, I was privileged to be lectured of the differences between single malt and blended whisky.
Fortunately there was one available at the shelf so the night wasn`t ruined at all :)
So after some beer and whisky it was time to give up and get some sleep. The next day started with a minor hangover. Shower, “korjaussarja” and some rolled pizza woke the engines up. Finally we were able to pack the bags and head back home. Nice minitour indeed, if these three days were filled with minor set backs, troubles with the time schedules, accusations, laughing and some more laughing, what would a whole month on the road do to us innocent, jolly musicians? I think we certainly would like to know! ;) 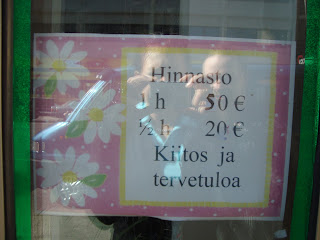 "More is more" fits for everything, not only Prog metal!
See you at the front,
Mikko
Lähettänyt Adamantra